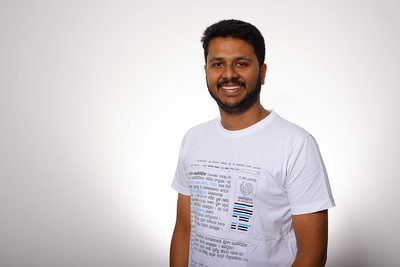 Subhashish is a civil society organizational leader, filmmaker and interdisciplinary researcher. Equitable access to information and participation in the knowledge commons have been his learning focus for over the last 17 years. He has been exploring how media can be a democratic tool through his practice. His current interests include understanding ethics and a rights-based approach to tech research and applications.

He has a background in leading key programs for many international organizations that advocate for an open internet. As a 2017 National Geographic Explorer, he has produced and directed eight documentary films. An early social entrepreneur, he founded a participatory media project called OpenSpeaks in 2015, co-founded an online venture called eOdissa in 2008 and a nonprofit O Foundation in 2017.

Subhashish currently heads the Law for All Initiative at Ashoka, an international nonprofit identifying, recognizing and equipping many social entrepreneurs worldwide with leadership opportunities. Before joining Ashoka, he led community engagement for the Internet Society in Asia-Pacific and Mozilla across Asia. He played similar roles at the Wikimedia Foundation and the Centre for Internet and Society, focusing on growing Wikipedia in over 23 South Asian languages. He designed programs and fostered the volunteer-led Wikipedia/Wikimedia communities across South Asia, apart from managing collaboration in the higher education and GLAM (Gallery, Archive, Library, and Museum) sectors. O Foundation, a nonprofit he co-founded, is involved in participatory media research and resource-building, focusing on low-resource language communities.

Subhashish was a 2019 Digital Identity Fellow at Yoti and a 2017 Online News Association’s 2017 MJ Bear Fellowship. His Yoti Fellowship helped him study the exclusion of some of India’s highly marginalized groups due to the massive rollout of the national biometric ID Aadhaar. This ethnographic research led to the 2021 documentary film “MarginalizedAadhaar”.

With a grant from the National Geographic Society in 2017, he worked on three documentaries—Gyani Maiya, Remosam, and Mage Porob. These films chronicle the community narratives in three endangered languages, Kusunda, Remosam (Bonda), and Ho.

As a steward of Openness movements, he has volunteered as a community catalyst, advisor, and collaborator for over a decade to grow Open Internet/Tech, Free and Open Source Software, Open Culture, and Open Access. He has been active as a practitioner and community leader in the Wikipedia/Wikimedia, Mozilla, and Creative Commons communities. Furthermore, he has been a volunteer advisor to many global institutions. Some of his current advisory roles are Representative to the Creative Commons Global Network Council for India, an Advisor to the Digital Language Diversity Project (DLDP) at the European Union, and Wikitongues. He co-led the revival of the dormant Odia-language Wikipedia, built a 55,000 voice data library in Odia (largest openly-licensed speech dataset in the language), and brought to life two input tools for typing Odia.

As an open project, OpenSpeaks is widely regarded as an Open Educational Resource (OER) and strategy document to support language digital archivists working to sustain low-medium-resource languages. Over the years, OpenSpeaks has been supported by the Creative Commons, Grant for the Web and Wikimedia Deutschland’s UNLOCK Accelerator. For the media innovation through OpenSpeaks, Subhashish was awarded the Online News Association’s 2017 MJ Bear Fellowship.

Subhashish has received support from civil society and other organizations to travel and speak at conferences in over 20 countries. Some of the notable opportunities include two TEDx talks, Wikimania (2013–2019), Decolonizing the Internet (2018, Cape Town) and Decolonizing the Internet’s Languages (2019, London) by Whose Knowledge, Mozilla Festival (2019-2022), Global Voices Summit (2015, 2017 and 2019), UNESCO’s “Role of Linguistic Diversity in Building a Global Community with Shared Future” Conference (Changsha, China), United Nations Internet Governance Forum (IGF; 2021, 2022), re:publica 202, Creative Commons Global Summit (2019, 2020), OER16 and the Celtic Knot Conference among others. He has written two book chapters, several journal papers and conference proceedings, opinion pieces, and blogs documenting learning, findings, and recommendations. He received the Opensource.com 2015 People’s Choice Award and the “Wikimedia Advocate and Expert” award for wide coverage of open-source software and the Wikimedia movement. He is a regular contributor to Global Voices, and has also written on Wikimedia Diff, Mozilla Blog, Creative Commons Blog, the Wire, Asia Times. His work has been covered in Reader’s Digest, WIRED, Forbes, MobileIDWorld, Good ID, Christian Science Monitor, and Scroll.in among others.